Links colours are not distinctive enough

Perhaps it's my monitor, or my eyes, but I don't feel that way with other SE sites.

I suggest increasing the saturation.

Update: Here's an screenshot (Chrome on Win7). If find the links to "zgv" and "mplayer", for example, difficult to detect. (They are unvisited - "SDL" is visited). 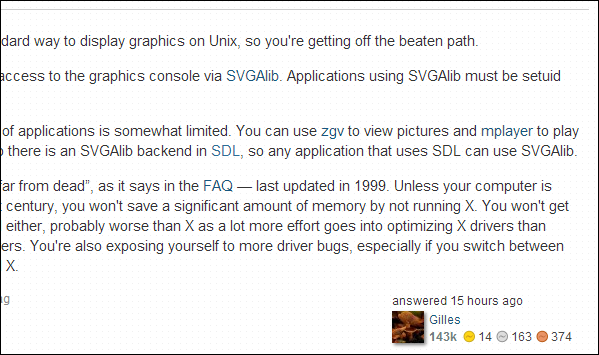 Had not visited U&L on Windows, but seeing your update with picture and also testing on XP and 7 I see the problem. As Windows fonts in general is much thinner the effect is unfortunate.

Haven't noticed a problem with it here. If for anything the difference between unvisited and visited could be better, but hasn't been a problem I've given much thought (as in I manage to distinguish between them without much conscious thought).

As a test you could go trough this guide <-- That is a link ;-). Go full-screen by (typically F11) and click trough the images at top. Each test has text that describes what you should see, and in some cases how to view them as well as how to correct some of the cases.

Doubtful this will show differently as picture, but here we go:

Not the answer you're looking for? Browse other questions tagged feature-request design user-interface .

10
Design Ideas for Unix and Linux site Updated
8
Code inside spoiler markup is not hidden
5
Why is the number of votes not clickable on this SE site?
6
Reviewing links on a answer
0
Theme's background colours to highlight question asker, `code`, etc. are too faint
4
Why are posts to multiple sites not found automatically?
5
Is it possible to modify visual rendering of links locally?