Where should this go, assuming it is right format for stackexchange sites

I ran into this question:

Can the empty spaces/background in a terminal be replaced with a random(but pretty) pattern of ASCII characters?

And while I thought it a very interesting question, I questioned whether or not it belonged under "Unix & Linux", and even gave feed back about how displaying random characters around real information can make things hard or near impossible to read and wondered what they were trying to accomplish,

But the question goes into using bash to generate and/or maintain a background of an unrelated image and interspersing it around content text.

Then they go into using bash's prompt vars to aid in generating this, as well as asking about how this output is generated or comes from a "VT subsystem" (a primitive vt102 emulator that runs on the console for purposes of using the console with curses-type programs when one would like more than a simple line-oriented interface during system repair).

Then there is talk about how bash makes use of the terminfo database capabilities by including them in the prompt vars (PS1, et al), which is a misleading statement/point of view, as bash doesn't make use of that database and shouldn't -- though a user might they might do better to store output of 'tput' for various actions rather than hardcoding some terminal specific terminal codes -- though they do use tput later.

I keep wondering what the question was -- where would this be used, but it seems clear it has little to do with bash, more than other posix compatible shells.

If I knew what the question was, I might think it better on a computer-art forum or something else, but it's hard to see how this is a unix/linux question as I tried to answer how it's not the best way to communicate information as dynamically generated background around content, but somehow that got translated by him into my thinking it doesn't belong on any SE sites, which I wasn't saying though in thinking about it, it doesn't really seem to fit the Q/A format and might better belong on some QA's wiki, but not having much experience w/that, I can't say. Anyway, he was then justifying how the Q getting 22 points justified its inclusion on the unix.sa site, and saying if it wasn't allowed, he wouldn't have done 116 other contributions "which stands well above ̶y̶o̶u̶r̶s [your contribution count] at this point in time" .

At this point, I don't know what to do if anything, but hoped to bring it to the attention of those with more experience who might be able to do the right thing (if doing anything at all).

Responding to a comment by @sim, You said it belongs here. Do you mean here in meta? Or that it is a question about Unix or Linux and belongs in the original forum.

To clarify why I had a question about its current location being appropriate:

Looking at what the forum is about (from https://unix.stackexchange.com/tour):

1) Ask questions, get answers, no distractions This site is all about getting answers. It's not a discussion forum. There's no chit-chat.

2) Get answers to practical, detailed questions Focus on questions about an actual problem you have faced. Include details about what you have tried and exactly what you are trying to do. Topics to ask about:

---- I'm not sure ascii art in the background of normal foreground TTY traffic really fits...

Not all questions work well in our format. Avoid questions that are primarily opinion-based, or that are likely to generate discussion rather than answers.

*Don't ask about... 1) Anything not directly related to Unix or Linux

(How is this question directly about either?)

(um...how is this question not leading to extremely long answers?)

Like I said -- it is interesting, just not sure that it belongs under the Unix/Linux site, nor after thinking about it, am I sure that it fits the format of this site.

However, I read your now-deleted answer, and I see what you're driving at.

There are questions on this site sometimes that ask the wrong question. We call this the X Y problem.

When you see someone (especially a beginner) asking the wrong question, when they have a real actual problem they are trying to solve but are going about it completely the wrong way, there is some justification for giving them the answer they need rather than the answer they asked for. It's almost always better to do both, though.

On the other hand, when someone is simply trying to learn more about their system and the underpinnings which hold it together, there is little use in pointing out how difficult they are making things for themselves. That is the case with this question, as has been pointed out to you in numerous comments.

The distinguishing factor is: What is the asker actually trying to accomplish?

If they are trying to accomplish a depth of learning, it won't help them accomplish that to question the premise of the question.

So long as the question is on-topic (i.e. it's about Unix and Linux) and it can be answered, there is no reason to push it elsewhere.

The question seems completely on topic to me. At the end of the day, any question that asks "how can I do X on a *nix system?" is on topic here. The question you link to is indeed extremely detailed (possibly too detailed, yes) but that's normally a good thing not a problem. The main question is clearly stated in the title: Can the empty spaces/background in a terminal be replaced with a random(but pretty) pattern of ASCII characters?

Now, I quite agree with what you say here and in your (now deleted) answer, this sounds like an absolutely horrible idea, but that's besides the point. As a wise geek once said, "it is not UNIX’s job to stop you from shooting your foot. If you so choose to do so [sic], then it is UNIX’s job to deliver Mr. Bullet to Mr Foot in the most efficient way it knows". So whether or not we feel what the OP is trying to do is a good idea is irrelevant to whether or not the question itself is on topic.

And this isn't even borderline. It is a question about manipulating shells and terminals, the very backbone of the site and probably the most common general topic we have. Very few things here are more on topic than shells and terminals. You mention that you feel the question has more to do with POSIX compatible shells than with bash. That may be true, but those are 100% on topic anyway.

Now, the OP's complaint about how their contributions are more than yours, however, is completely out of line. You have every right to bring this here to meta and thank you for doing so! And new users have as much of a voice as established veterans. I don't care if you have posted 1000 times or once, you're still a member of the community and you have every right to have your voice heard!

I want to also explain why I deleted your answer. This had nothing to do with whether or not I agreed with what it was saying (I did agree, as I said above) but with the simple fact that it wasn't actually answering the question. Here's a screenshot of the answer for those who can't see it: 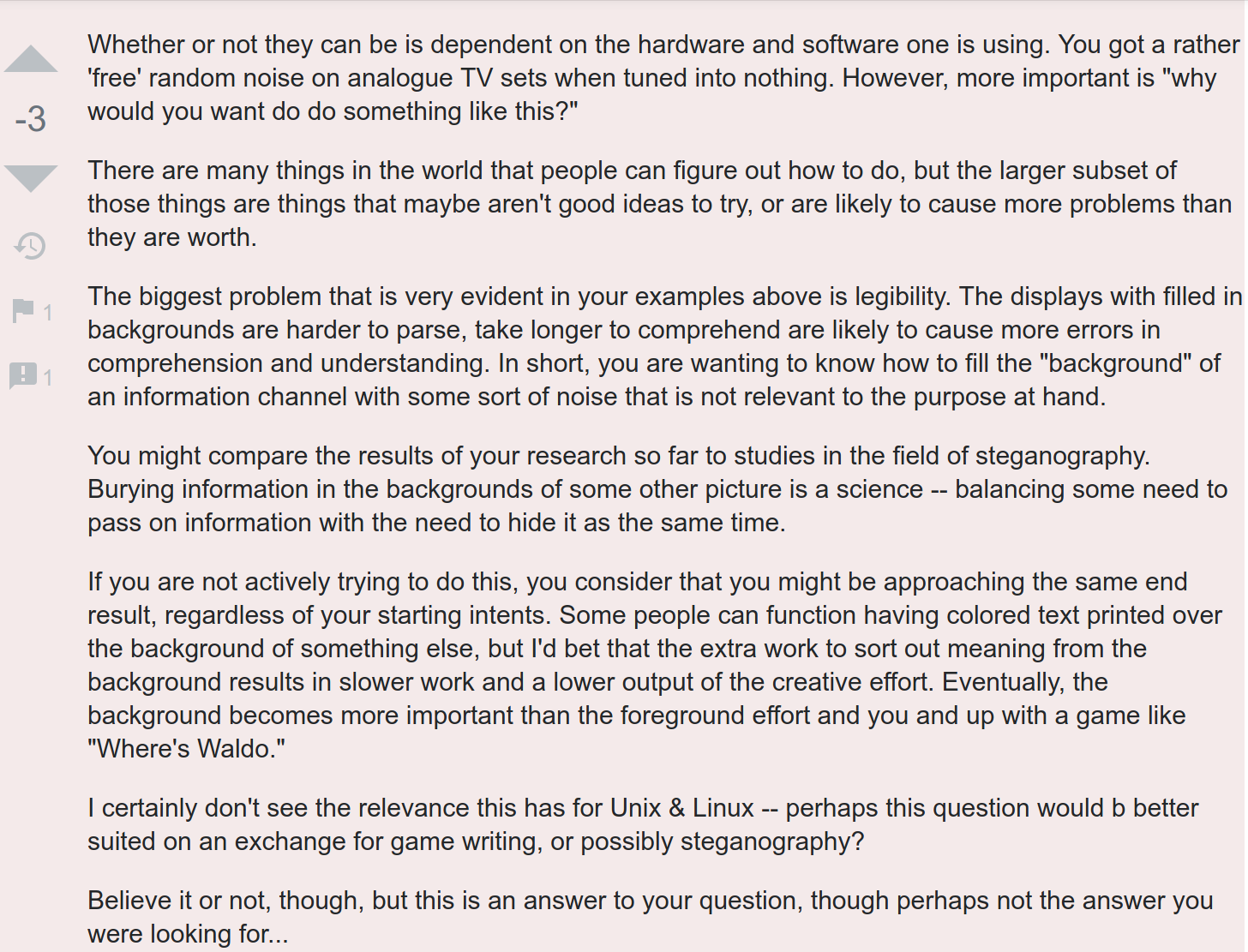 Your entire post is making valid points about why what the OP wants is a bad idea. OK, great, but that isn't actually answering the question. If you feel the question itself isn't useful, then you should downvote it. Posting an answer that doesn't provide an answer and instead only argues for why the question's objective is not useful or why the question doesn't belong on the site isn't considered an answer and deleting it is standard operating procedure across all SE sites. You'll note that your answer was already sitting at -3 without a single upvote.

There are some cases where an answer like that would actually be considered useful, but I can only think of cases where what the question is asking for is actively dangerous (security risks, breaking the system etc). In such cases, an answer explaining why this is a dangerous idea would indeed be useful. But even then we might expect the warning and explanation to be followed by a solution. After all, if the OP wants to shoot themselves in the foot, then it's not our job to stop them. Breaking systems (preferably VMs) can be a useful educational tool, after all. But in this case, there is no danger, the worst case scenario is a probable loss of legibility in a terminal emulator.

So that's why I deleted it. Nothing emotional about it, just regular every-day SE rules.

Not the answer you're looking for? Browse other questions tagged discussion review .

7
Shell scripting on-topic?
4
Should more of the reasons for flagging include a comment option?
2
Which Forum to Post Questions about CUPS
2
Are how to use search engines to find Unix/Linux-related information appropriate for this website?
3
But Linux is a Kernel!
2
How to treat obsolete questions?
20
Should we have a stock answer for broken Windows boot?
7
Should I write a new answer for p7zip to open RAR file?
1
My question wasn't specific enough, but got I got the right answer anyway. How should I proceed?
17
Which programming languages are appropriate here?