I recently came to know that we can use

for manually adding syntax highlighting. It is also mentioned in: https://unix.stackexchange.com/editing-help#syntax-highlighting

I feel question using tags like text-processing, sed, awk, grep, etc but not bash could use syntax highlighting by default, instead of manual addition

Note: It need not be bash as such, anything suitable 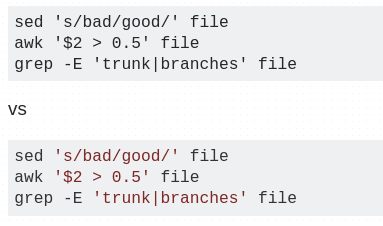 For your trivial examples, syntax highlighting looks mildly good because they have short strings in them highlighted as such. But for most text I have seen, blanket-wrapping all awk or sed code (especially those that are even mildly complex) as a string is useless. It might as well not be highlighted at all.

Not only that, most of the actual text given as examples for processing have no meaningful application of bash syntax highlighting at all. In many cases, they just simply highlight random words and add noise to the text, making a visual parsing of it harder.

So, if highlighting was applied to the entire post because of a tag, at best they're mostly useless, at worst they're actively harming readability. I'd rather not have any syntax highlighting applied of these by default. If you need to highlight a command, highlight it using <!-- language: ... -->.

By the way, awk code can be syntax highlighted as awk, but not if it's wrapped in quotes:

So, if anything, awk should be highlighted with that.

Not the answer you're looking for? Browse other questions tagged feature-request formatting syntax-highlighting .