There's a horizontal line which appears between the pagination buttons under the question list when you hover over any of the buttons. I've tested it on Chrome 50 and IE11 and it's present on both.

It seems to be caused by this rule in all.css:

Adding the following rule fixes it:

Secondly, hovering over a related question that is more than one line long shifts everything down one pixel: 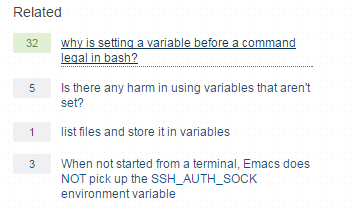 A potential fix for this would be:

The score of the question also has an underline when hovered, which doesn't seem intentional.

To get rid of it on just the score:

To get rid of it on both the score and question:

2
Horizontal line between a question and comments