Can we leave a Comment before casting a close vote?

I asked a question regarding joining 2 avi files using a GUI, and someone else earlier asked how to do that, but using the CLI. Another not-so-careful user decided to vote to close, and I suspect that this person didn't actually read each question well enough, so she thought that it was an exact duplicate. If such a person would have left a Comment, I could have pointed that out.

sidenote: I would have preferred it if the original Question didn't restrict the Answer to CLI to avoid this sort of thing.

Just ignore the close vote. The question will stay open as long as it does not collect four more close votes (or one close vote from a moderator).

As long as four more voters (or one moderator) do not make the same misinterpretation of your intent, the existing close vote(s) will eventually expire.

Voting to close as a duplicate leaves a comment.

I can't see the history of this question now, and it's been thoroughly messed up by Jeff. For future reference, if there is a vote to close as duplicate without a comment, it means the comment has been deleted — presumably by the close voter when they realized that their vote was mistaken.

It wasn't possible then, but it is now possible to rescind close votes as long as the closure hasn't been carried out.

Chris is right, you should just ignore it, but for future reference you don't have to guess; you can click the "close" link to see exactly what people have voted for. If they voted for "exact duplicate", you can click that to see which posts have been voted as duplicates. You were right; somebody voted to close as a duplicate of the CLI question: 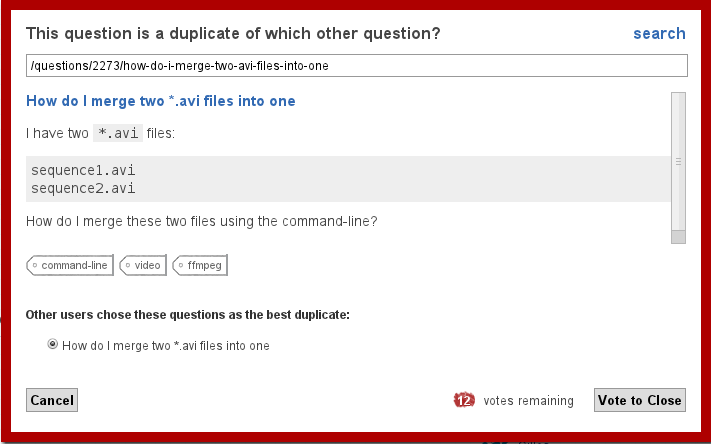 Not the answer you're looking for? Browse other questions tagged discussion comments vote-to-close duplicate .

14
What's better place for questions about "Linux/Unix programming libraries" - Unix.SE or SO?
10
Are questions specific to a particular OS on topic?
5
Trying to illustrate how my question differs from an existing one
5
Editing before vote to close
30
What about latecomers?
6
Deal with a question that doesn't have a proper answer But might help others
3
Did I vote close this question?