How come this community user has a reputation of 3?

Is this a bug? I see the community user as not a person and generally has the reputation as 1.

I asked about this in one of the mod rooms and the explanation I got was as follows. 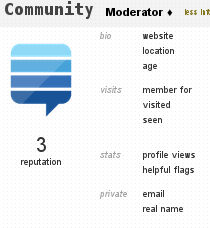 In this scenario where the Community user has a rep of 3, it likely got the +2 from an answer which was accepted on a question which was migrated to U&L. The migrated question likely already had an answer attached, which was later accepted after being migrated. In this scenario the user that provided that answer does not have an account on U&L, so the +2 is absorbed by the Community user.

It was unclear to me if there was a systematic task that runs which resets the Community user's back down to 1 or if it just naturally happens when downvotes start occurring on the site, or against Q&A's that do not have an affiliated user on U&L.

Not the answer you're looking for? Browse other questions tagged bug .

2
Header size on new user pages
10
Why can't I edit a question I have reviewed
4
Can't close as duplicate with no answers
2
New users posts review count calculation
2
Have to use chromium to ask questions on meta
6
5k .. 10k reputation bug? header shows (unavailable) own suggested edit
2
Why am I not allowed to answer this question
1
Certain parts of meta are broken with HTTPS everywhere