How to identify which questions belong to which site?

I am really getting confused which site is used for which purpose. For example, see the questions below.

Should I use "apt-get remove" or "apt-get purge"?

All the questions look pretty similar and I believe all these 3 questions ideally belong on AskUbuntu site.

The sites overlap a lot. U&L is largely a subset of Super User, and Ask Ubuntu is largely a subset of both. That said, there are some areas which aren't contained in the more broad site, such as Super User probably doesn't want all our shell scripting questions. And we probably don't want questions about Ubuntu the organization. And of course there are lots of topics that Super User is OK with that we don't want, such as Windows. 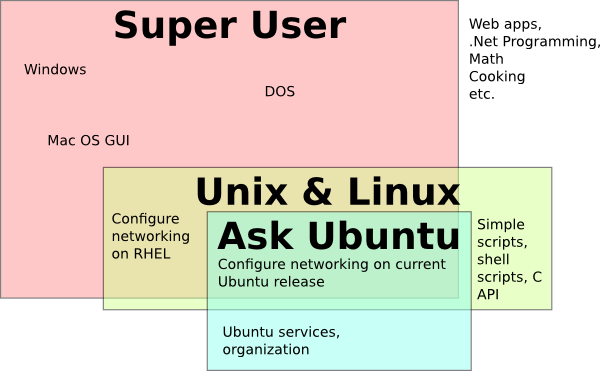 Note that there are overlaps with other sites too; for example, we overlap with Stack Overflow on scripts & the Unix API.

How, then, to decide which site to ask on? Let's assume it's something you could ask on any of the three sites, as if it only fits on one, the answer is obvious.

Actually in an ideal world all of them belong here, because all Debian-based distributions has the apt binaries, which are in the scope of this QA. Now, here's the take, they are also in the scope of SU and AU. So, where they belong, wherever they can be asked.

No site in the Stack Exchange Network has a close reason of “this question would fit better on another site”. Each site defines its own scope, without reference to other sites.

It follows, then, that a question about using apt-get to remove packages can be on topic on each of those sites. So where should the question be posted? Wherever the asker feels comfortable.

Does this duplicate work? Yes. Cross-site duplicates must be separately answered, rather than closed as dupes, so more work must be done. But SE seem to have decided they’re not worried about that. To be fair, most questions which are on topic on multiple sites are fairly simple questions, so it doesn’t duplicate much work.

Can one person ask the same question on multiple sites? No. That is explicitly disallowed. I know that Christianity and Biblical Hermeneutics have come to an agreement that you can cross-post on both sites as long as you substantially rephrase the question to suit each audience: word-for-word cross-posting remains forbidden. I don’t know whether any other two sites have come to similar agreements.

-2
should questions regarding ubuntu and its derivatives be asked here?
0
AskUbuntu vs UnixLinux Stack: Where to post?
11
Unix.SE vs ServerFault vs SuperUser vs Android.SE
13
Why can we not vote to migrate a question to superuser.com?
6
Where is best to ask my Linux-related question?
0
The migration target Askubuntu should be available

10
How should we promote the site?
10
The Scope of This Site?
23
Migrate Ubuntu-specific questions to AskUbuntu?
14
Titles that contain tags
2
Did both of these answers have to be deleted?
4
Can you polish up the chrome tag?
7
Should I write a new answer for p7zip to open RAR file?
0
Where should this go, assuming it is right format for stackexchange sites