apache seems to have a sligthtly bigger usage preference over httpd, most questions are tagged with both. By the way, I'd prefer apache to be synonym to httpd, not the opposite.

My point is that Apache is more that just the http server sub-project; apache-httpd would be a better tag. Yet, using httpd for lighttpd or other web-servers, for historical reasons, would just be confusing, as lighttpd executable daemon is not even called httpd. Would you tolerate the httpd tag for IIs on ServerFault?

Apache isn't the only httpd, and looking through that tag I indeed saw another httpd (lighttpd) on the first page...

Seems like maybe we should just get rid of httpd entirely.

Questions about Apache get apache; ones about lighttpd would get lighttpd; etc.

If we want a generic tag, webserver would be much clearer, already exists, and is more popular.

Keep an open mind. Just because you know of only one type of HTTP server doesn't mean it's the only one. Take a look at all the HTTP servers available in this list via Wikipedia:

There are more than this and often servers just as Jetty, JBOSS, Tomcat, and many others can be dual purposed to serve static content as a HTTP server as well as serve as an application server. 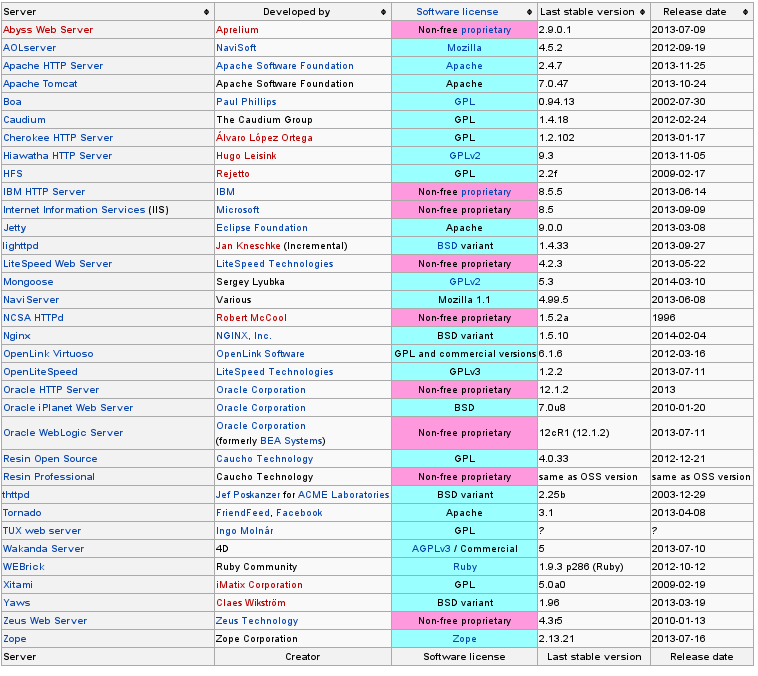 With your edit I think your point is that Apache (the tag) could be associated with both the HTTPD server and the overarching project + the Apache Software Foundation.

I think part of the confusion is that most people associate the apache with the HTTP web server sub-project vs. anything else. For example I think most people would be surprised that Tomcat (another subject) is in fact called Apache Tomcat.

I think part of the confusion stems from Ubuntu (assuming Debian does the same) packages the HTTP server with an executable called apache2.

I think I would be inclined to reorganize the tags so that apache is used as a tag for Apache related items (software, licensing, foundation), while httpd and a synonym tag apache-httpd were used for actual HTTP server related items.

I dislike making apache a synonym for httpd since it can span multiple pieces of software.

Given the observations made by derobert and slm, we should use the tags

Since apache is overwhelmingly used to mean “Apache web server”, we should make this a synonym to a more clearly specific tag: apache-httpd. Since httpd is a natural tag but a bit of a hodgepodge, we should make this a synonym of the more general tag webserver (if we don't make it a synonym, either it'll end up recreated or people will misuse apache-httpd obtained through completion).

We need to get rid of the tags apache and httpd. Most of the 388 apache questions are about Apache httpd, so we should track down the ones that aren't, then synonymize apache to apache-httpd.

There are 28 httpd questions but only 13 that aren't also tagged apache. So the easiest course of action is to retag these 13 tags, then get rid of httpd and re-create it as a synonym of webserver.

Here's the course of action:

Not the answer you're looking for? Browse other questions tagged .

2
Cleaning up the apache tag

5
Merge tags mac and macintosh
5
Synonym for /synchronization and /sync?
5
"tag" and "tags" are not synonyms?
2
Synonym: x11, xorg
2
Cleaning up the apache tag
2
Merging tags [wifi] and [wlan]
3
But Linux is a Kernel!
10
Merge libvirt and libvirtd tags